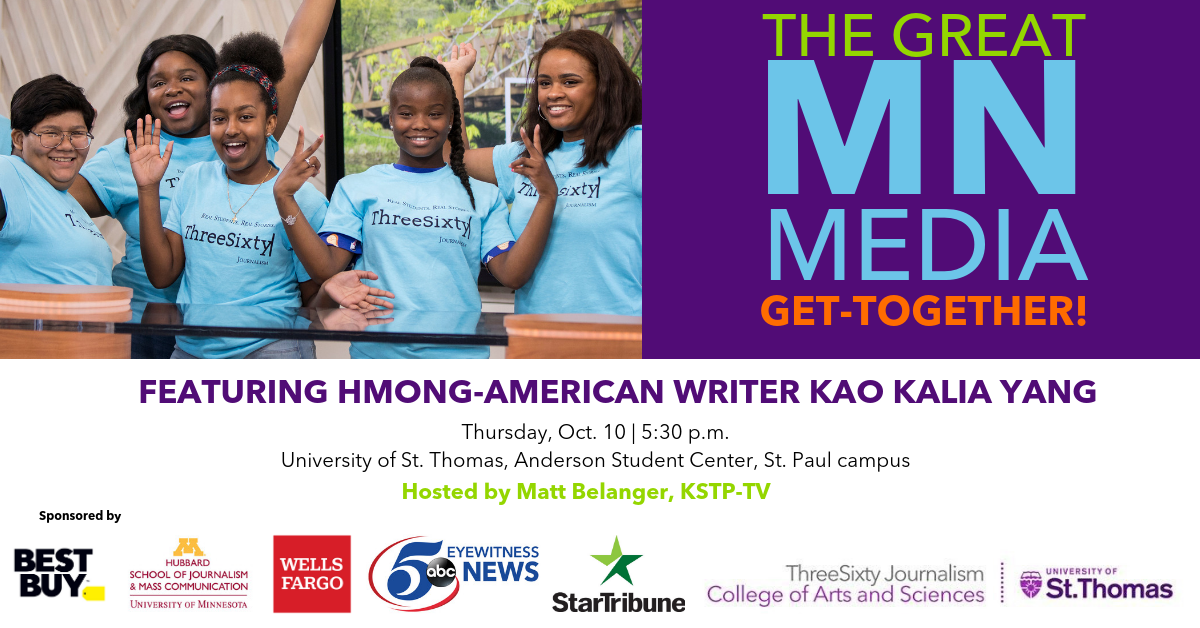 The 2019 Great MN Media Get-Together is a unique opportunity to support ThreeSixty Journalism and explore the power of storytelling with acclaimed Hmong-American writer Kao Kalia Yang.

Matt Belanger, the 2019 Get-Together host, joined the KSTP 5 Eyewitness News team in June 2016. He came to the Twin Cities from Atlanta, where he worked as an anchor and reporter for WSB-TV. Previously, Matt worked at WTAE in Pittsburgh and WGAL-TV in Lancaster, Pa. He started his career in Sioux Falls, S.D. Matt has received many awards for his investigative work, including five regional Emmy Awards and five first-place awards from the Associated Press.

Kao Kalia Yang, the 2019 Get-Together featured speaker, is a Hmong-American writer. Born in the refugee camps of Thailand, she came to America at age six and was raised in the housing projects of St. Paul. Yang is the author of The Latehomecomer: A Hmong Family Memoir (Coffee House Press, 2008), a National Endowment for the Arts Big Read title; The Song Poet (Metropolitan Books, 2016), which won the 2016 Minnesota Book Award in Creative Nonfiction Memoir and will be the first Hmong story adapted into an opera by the Minnesota Opera. In fall 2019, Yang’s first children’s book, A Map Into the World (Carolrhoda Books) and a co-edited collection titled What God is Honored Here?: Writings on Miscarriage and Infant Loss By and For Indigenous Women and Women of Color (University of MN Press) will be available.

ThreeSixty Journalism will present Duchesne Drew with the 2019 Widening the Circle Award at the 2019 Great MN Media Get-Together. The annual award honors individuals who have made extraordinary contributions to the next generation of journalists, particularly while promoting inclusion and diversity. Currently community network vice president at the Bush Foundation, Drew is a veteran newspaper reporter, editor and manager who previously worked at the Minneapolis Star Tribune and The Dallas Morning News. In addition to numerous board commitments, Duchesne is a steering committee member of Greater MSP’s “BE MSP” Initiative, which is focused on retaining professionals of color within the Twin Cities Region.