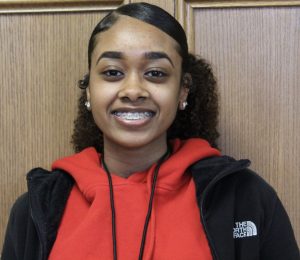 I walked into the Newborn Intensive Care Unit (NICU), where I saw my frail baby brother for the first time attached to machines and breathing tubes due to complications from fluids entering his lungs.

As a 9-year-old, I couldn’t grasp the severity of my brother’s condition. I couldn’t understand why I could not see or touch him the day he was born. I was heartbroken. He and my mom spent three weeks in the NICU. Going in and out of the NICU, I saw so many babies on the verge of life.

I would ask the doctors, “What are you doing to him? Why? How do you do that?” As a 9-year old I was inquisitive, but my brother wasn’t getting better.

Those three weeks were the toughest of my life. I went from waking up to my mom making me breakfast, to going to the hospital every day to see her and my brother in pain. There were days they stopped us from seeing them because of the complexity of my brother’s condition.

As the oldest, I had to take on new responsibilities. I would have to wake up and make me and my sister cereal some mornings. I would wake up thinking about my brother endlessly. Without my mom or father being home, we had to eat fast food or have relatives come to the house to supervise us. It was uncomfortable. I had to be emotionally strong for me and my 7-year old sister.

The following weeks were also tough because when we took my brother home, twice a week for two weeks we had a health professional who came to our house to check on our brother’s health.

After those three weeks, I could say our family grew closer than ever before. We acknowledged each other more as we endured the same pain. As time went on, we started eating together, watching movies together and going out together as a family. Prior to my brother’s birth, we would eat at separate times, and we wouldn’t didn’t have that quality time a family should have.

Without realizing it, we created a ritual where every other week we would go out and do something as a family, whether it be going out to eat, shopping, or just walk in the park. This is something we still make time for despite our busy schedules.

Being able to experience this at such a young age taught be to never take anything in life for granted because there are people who might not have the same opportunities as you. If my brother could do it, I can do it. I can definitely say it made me mature quicker than most of my peers because it opened my eyes to the value of life.

This led me to discover my interest within the health professions. My brother has really influenced me to major in biology and begin my path in becoming a general surgeon to further learn about the human body. I want to help people who could’ve been in my brother’s position and prevent the things that happened to him so it doesn’t happen to others. I began to be more tentative to the things that happen to people with conditions similar to my brother’s.