At 17 years old, Zach Sobiech became nationally known for “Clouds,” a popular song about his battle with terminal cancer, which ended in May 2013.

But his story didn’t stop there.

One year after the Lakeland teen’s death, his mother Laura Sobiech published a memoir, “Fly a Little Higher,” which uses a line from “Clouds” as the title. The book isn’t just a story about Zach’s battle with cancer. It’s about the value of life, and living each day like it’s the last.

“We all suffer, we all have our stories. Zach’s was cancer. We’re all dying, whether it’s tomorrow or 60 years from now. It’s going to happen to all of us,” said Laura, reflecting on the universality of her book’s message.

Laura was inspired to write about Zach because she knew her family’s story was rare.

She started with a Caring Bridge blog, using it as a tool to update Zach’s information for loved ones to see. Once she began to write, “it evolved into a way for (her) to step out of the chaos” of what the family was dealing with.

Three weeks after Zach died from Osteosarcoma (a rare bone cancer), Laura was approached by her two closest friends — both authors — about the possibility of writing a book. A literary agent agreed to market it, except Laura was a bit nervous since she “didn’t know how to write a book.”

Prior to her entries on Caring Bridge, Laura hadn’t written at all. However, she had held on to memories and stories, knowing they might be valuable in the future.

Between phone calls and e-mails with her two friends, Laura got a crash course on the basics of writing, chapter by chapter. Her worst critic was always the one in the mirror.

“I remember sitting there, writing, thinking, ‘This is boring, they don’t want to read this,’’’ she said. “I know why this matters to me. But somebody who’s never heard of us, are they going to care?”

Encouragement and feedback from friends kept Laura writing, but she still faced roadblocks. Being mindful and respectful of how she was representing the people she wrote about was among them. 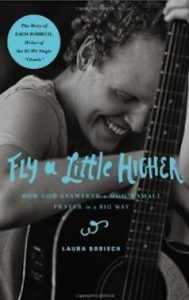 “It’s tricky when you’re writing a memoir because you’re writing about those people. You’re having to assume some of their perspective, or at least give your perception of things,” she said.

Overcoming marriage issues with her husband Rob was — Laura felt — crucial to the story, yet she spoke to him first before including it in the book.

“It was a difficult thing for him to let me write that, but ultimately he stepped back and let me do it,” she said.

Another sensitive topic was her daughter Alli getting married around the same time as Zach’s death. As the date drew nearer and Zach’s condition grew worse, it became evident to the family that the two events were about to intersect.

“It was hard. This was Alli’s whole college life and engagement and everything, and it was supposed to have been about her, focusing on her and getting her off into her life,” Laura said.

While the timing wasn’t ideal for the family, Alli’s wedding ended up being a reprieve from the sadness of Zach’s passing.

“I really did look at her wedding as sort of the light at the end of the tunnel, no matter where we were with Zach,” Laura said. “We look back now and just know that everything happened the way it was supposed to. (The wedding) was a really beautiful way for our family to come back together.”

When Laura wrote about happy memories, such as parties or Zach performing at the Varsity Theater in Minneapolis, she turned to others in the room to share their experiences. Putting herself in other people’s shoes, Laura said, helped stir up memories of those nights and allowed her to write richer reflections.

“As far as writing the book, for me, it was just a continuation of what Zach started. He wrote music, he wrote songs, I wrote the book,” Laura said.

She’s had strangers contact her — before the book was even written — to say that their lives were changed by Zach’s story.

“He was in a hopeless situation … there was nothing left to treat his disease, but he somehow managed to bring hope to people. I think we really found that fascinating because it was a sad story but it left so many people joyful,” Laura said.

“It’s resonating with people who struggle with pediatric cancer, but it goes far beyond that.”

Laura said she learned two important lessons in handling an unfathomable situation like hers: Be vulnerable. And say yes.

“When you’re going through something like this, the tendency is to just want to draw back and tuck yourself away,” she said.

But Laura resisted that urge, and found that by opening up, she was able to see the impact her family’s story had on other people. She also saw it as an opportunity to make her struggle worth something. If she could help others, then her family’s anguish might make a difference in someone’s life besides their own.

“Writing the book was just a way to share even more of Zach with those that had already responded to what he had to say (in his songs),” Laura said.

By embracing vulnerability, Zach and his family were offered opportunities like recording “Clouds” and performing it at a major music venue in the Twin Cities. It wasn’t always easy to accept that path, though.

“I didn’t want Zach to put himself out there,” Laura said. “This is not the time to be doing this whole ‘rockstar thing.’ He was so sick during a lot of that time.”

It never stopped Zach from saying yes. By letting her son have control over his last days, Laura is thankful that the entire world heard “Clouds” the way Zach intended.

“People tell us almost every day, ‘This has changed my life.’ And that gives some meaning to what we went through. Not a lot of parents get that,” Laura said.

Now that her book is published and she’s no longer writing all the time, Laura said Zach’s absence is more profound than ever.

Thankfully, with his memory just a click or listen away, she can always escape to his “Clouds.”

Here are a few excerpts from Madie Ley’s interview with Laura Sobiech about Zach’s life and how it informed “Fly a Little Higher.” Also, be sure to check out fellow  ThreeSixty writer Simone Cazares’ story on Zach from 2012.

For the entire Sobiech family, faith has played a crucial role in handling Zach’s death.

(Faith) “is how we went through this without despair and without wrestling with all sorts of anger and guilt,” Laura Sobiech said. “That’s where we continue to put our hope.”

The teaser from her book, “Fly a Little Higher,” shows just how deeply Laura trusted God to guide them through their situation:

“Okay, Lord, you can have him. But if he must die, I want it to be for something big. I want someone’s life to be changed forever.”

This is what Laura prayed when she found out her 17 year old son had only one year to live. With this desperate prayer, she released her son to God’s will.

Laura also kept in mind that her readers might not be religious, so she chose to present the family’s relationship with God in an objective light.

“I don’t like being preached at, I don’t like people telling me to live a certain way,” she said. “I simply wanted to write the book of. ‘This is how we did it.’ Take from it what you will.”

“The Fault in Our Stars,” a popular young adult novel by John Green, is about teenagers facing terminal cancer and their relationships to one another. It was Zach’s favorite book because “he could connect to the questions the book was asking,” Laura said.

One of the reasons Laura wrote her book is because she wanted people to see that Zach wasn’t always happy.

“He had those moments of desperation, bordering on despair,” she said, much like the characters in “Fault.”

Both books, while they are about teens with terminal cancer, address a larger scope and get readers thinking about the quality of their lives. It also keeps them mindful of wasting the time they have here.

In the book’s epilogue, Laura tells a story about two girls that spoke to her at Zach’s visitation. Hundreds of people came to say that Zach made a difference in their lives, even some from out of the state. The two girls waited in line for an hour and a half to speak to Laura and her husband.

The first was shy and withdrawn, and said she was moved by Zach simply because he said hello to her in the hallway at school. The second, fighting tears, told Laura that her son had stood up to some kids who were bullying her — and that it had meant a lot.

“And I thought, that’s what I’m proud of. Yeah, he wrote a beautiful song, the world responded to that. But that was his spirit. He was able to see the people in his life. Really see them. As awesome as it is to think about it, we don’t do it, we don’t act on it because it requires some vulnerability on our part,” Laura said.