Katelyn Vue, a senior at North St. Paul High School, won first place in the Arts & Entertainment category for her story on local high school students who painted the wall of a Minneapolis domestic violence shelter as a symbol of hope and healing. Skyler Kuczaboski, a freshman at Dartmouth College, also won first place in the Columnist category for her personal recounting of learning about white privilege. 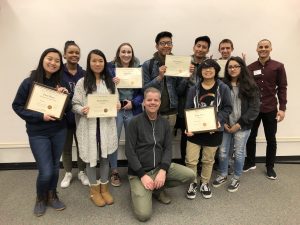 Zahra Mustafa, a junior at Burnsville High School, earned third place in the Columnist category for her college essay on rewriting the narrative about refugees. Kuczaboski also earned a third-place honor in the Editorial category for her op-ed on kneeling for the national anthem.

Elezebet Mitiku, a junior at St. Paul Harding, took home a third-place honor in the Feature Photo category for a photo she took for her story on Ethiopian runner Feyisa Lilesa’s protest at the 2016 Summer Olympics.