ThreeSixty students nestled into an editing space around the newsroom to  write their first radio story about Juxtaposition Arts Wednesday at MPR News Radio Camp.

The students are working side-by-side with MPR News and American Public Media mentors to write their stories.

The mentors for 2019 Radio Camp include:

Students learned how to write for radio, sort through clips, decide a story structure, choose cuts and draft their stories all while on deadline.

Day Three of @mprnews Radio Camp was filled with writing, listening and more writing as #ThreeSixtyJournalism students worked with mentors to complete their feature stories on @jxta_arts #MPR360

A post shared by ThreeSixty Journalism (@threesixtyjournalism) on Jul 31, 2019 at 2:01pm PDT

17-year-old Safiya is interested in journalism and dreams of being a foreign correspondent. She’s particularly interested in the women’s movement in Afghanistan, which she thinks is under covered by the media. We’re thrilled she’s in this summer’s @mprnews Radio Camp. #mpr360 pic.twitter.com/0dau68wwwR 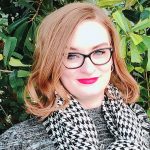 Program Manager Theresa Malloy Lemickson joined ThreeSixty Journalism’s leadership team in January 2019. She brings professional writing, editing and digital media experience to the role, as well as a passion for producing and sharing meaningful stories, particularly ones from underrepresented communities.

Most recently, Theresa was digital senior producer at KSTP, where she won two Upper Midwest Emmy awards. She graduated from St. Thomas in 2013 with a Communication and Journalism degree and, also at St. Thomas, is pursuing a master’s in English with an emphasis in literary journalism.