This op-ed story was produced during the Fall 2020 Youth Voice Workshop. 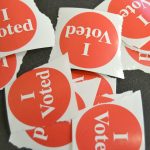 Who was going to represent me these next few years?

That was the question on my mind as I interviewed the school board candidates for my school newspaper before election day. It was in their job description to do so, with me being a student, and I figured we studentsI ought to know the policies they rolled out, which would have at least some impact on our education, and consequently, our life. So, before and after interviews and as the vote tallied up on election day, I wanted to know: Who was going to be the one to represent me?

Then I realized my answer: no one.

And that was decided long before the vote came in. Long before I even went to school, actually, because the school board never has and never will fully represent me.

Because as a 16–year–old, a junior in high school, for some reason, I can’t vote.

I want to be able to vote in school board elections. If the school board was adequately representing us, I wouldn’t care about voting. I wouldn’t need to ask for change. But they’re not.

The most obvious example of their failure is not listening to us. Many of the candidates I spoke to felt comfortable referring to the input of other community members or even their own judgement when it came to where they stood on issues, but very rarely, if at all, did I hear mention of a student who informed their viewpoints.

The lack of student voices shouldn’t be happening when we’re the ones who are most affected by their actions. It’s not that the candidates don’t care about listening. I know they value hearing from students, that they’re “open” to feedback. But caring isn’t the same as doing.

This problem extends to the school board members as well. Maybe in the past school board members traveled to the school to meet us, and I just didn’t get the email. Or maybe they have secret methods of gathering my feedback that are so discrete, I’m not aware I’m sharing it. But from my knowledge, I’ve never so much heard of any outreach toward students or any genuine desire to do so.

I understand we have forms of input, but it’s not enough. They can do better, and a vote is part of that solution. It’s not the solution, but I’d bet school board members looking for a rerun would be rushing in line to talk to students if we could. Or at least, doing more than they are now, which is close to nothing. And if they still fail to communicate and hear what we want represented, there’s no better way of accountability than a vote.

When I look at the students around me every day, I believe we are qualified to vote. We know what school is, we see its promises and shortcomings from where we are, as students. I see students that care and want the best for others around us.

Let’s remove unnecessary qualifications, because when it comes to that, there is no one more qualified, more deserving than a student to be represented. To vote.