AFTER GRADUATION, some high school students will attend college locally while others are bound for out-of-state schools.

Other students will work or enroll in technical programs.

But there is another growing option for graduating seniors: the gap year. It’s a period—typically an academic year—in which a student takes a break between high school and higher education. Students might work, travel, volunteer or study.

For some students, taking a gap year can provide benefits that students who pursue a more traditional path after high school may not receive, students and experts say. But it’s not for everyone.

Quentin Smith, 22, a University of Minnesota student, completed a gap year during the 2012-2013 school year. His desire to see some-thing outside of his hometown of Owatonna was part of what motivated him to study abroad.

“I want to see the world,” Smith said. “I want to actually get out and do things.”

Through the Rotary Youth Exchange program, Smith traveled to Indonesia after high school. His eyes lit up as he talked about his experiences overseas: excursions to surrounding islands, meals with his host family, a cooking class, bartering and opportunities to travel to neighboring villages.

Smith said that, through his gap year, he learned to see different perspectives, keep an open mind and minimize bias.

“Those are three big things driving my life right now,” he said.

Gap years are common in Europe and are becoming increasingly common in the U.S., experts say. These days, more gap year opportunities are popping up for students in the form of study abroad and volunteering programs. Even Ivy League schools such as Harvard and Princeton encourage a gap year for students who are accepted to their schools.

Other times, students may take a gap year to work and to save for college, or to simply figure things out. 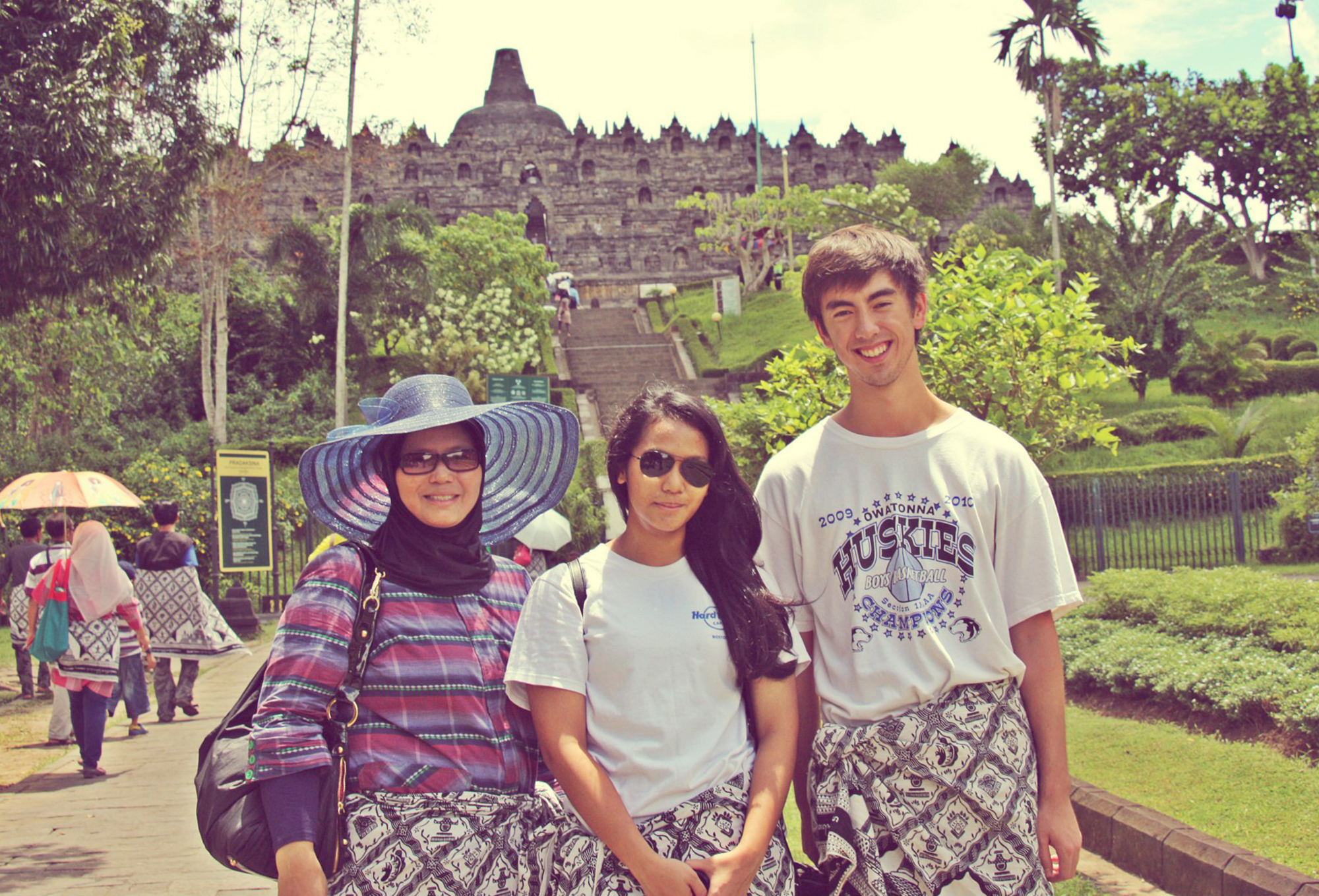 Quintin Smith, righ, during his gap year trip to Indonesia during the 2012-13 school year.

Taking a gap year can have great payoffs, according to students and experts. The three highest-rated out-comes of gap years, according to “The Gap Year Advantage: Helping your child benefit from time off before college,” are that students gain a better understanding of their identity and values, gain a better understanding of other countries, people and cultures, and gain more skills and knowledge for college or a career.

On top of these payoffs, many students find that a gap year helps them narrow their academic and career track, according to the American Gap Association. An independent, multi-year study from Rae Nelson and Karl Haigler, authors of “The Gap Year Advantage,” states that 60 percent of students said the experience either “set me on my current career path/academic major” or “confirmed my choice of career/academic major.”

For Smith, a gap year abroad allowed him more time to plan for his future.

“First of all, I was kind of a mess in high school and I didn’t know what I wanted to do,” he said, “so this allowed for one more year to think about it.”

However, a gap year is not for everyone. For those going abroad, a year-long exchange program like those in AFS-USA, which offers intercultural exchange programs, can cost $12,000 to $15,000, and others can cost more (although many programs have scholarships). The experience also can mean 6 to 12 months away from family and friends, culture shock and unfamiliar surroundings.

“If you’re not at least willing at least a little bit to go out of your comfort zone, you’re not going to have a good time,” Smith said.

While he was abroad, Smith stood out a lot, he said. He also experienced illness and homesickness, as well as missing out on the college experience during his trip, he said.

“It’s going to be harder to meet people once you come back,” he said.

At the University of Minnesota, admission isn’t based on one factor, but rather an overall assessment of a student’s application, said Admissions Counselor Steve Baker. A gap year on a student’s resume would be “more of a secondary factor” in the decision, he said.

Baker attributed a gap year to one of the many experiences that “enhances our student body, our culture, our discussion in the classroom,” but also recommends students “be thoughtful about what they are thinking about gaining in going into this gap year/deferral process as far as experiences.”

Katia Kozachok, a senior at Perpich Arts High School in Golden Valley, is gearing up for a gap year in the fall. Kozachok will be going on a year-long exchange to India through the Rotary Youth Exchange program.

“I’m going to become an even better person than what I am today,” she said, “and I’m so excited for that.”

Kozachok, who had been staying in a dorm throughout high school, is excited to have a homestay experience in India. She is spending her last couple of months preparing for the trip and trying to learn as much Hindi as possible.

While Kozachok is in India next year, Smith will continue his studies at the University of Minnesota, while keeping his eye out for more study abroad opportunities.

At the end of the interview about his gap-year experience, Smith offered some advice: “… There are other options than just going straight to college.”