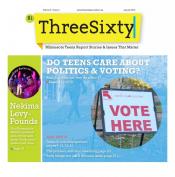 The timely magazine theme “Teens and Civic Engagement” – a look at how teens are playing an active role in society.

The new issue of ThreeSixty Magazine has arrived.

The timely magazine theme “Teens and Civic Engagement” – a look at how teens are playing an active role in society – was selected by News Team students and includes stories ranging from young activists to young entrepreneurs, from students who volunteer their time to students who share their leftovers. Other stories include a column on skin bleaching, a story on teen male body image, an article on the mental health stigma in the Somali community and more.

Students began the reporting process in late September, when they met in Murray-Herrick Campus Center at the University of St. Thomas to brainstorm story and theme ideas. The events in the following months unfolded something like this: Research the story. Find sources to interview. Interview them. Take photos. Write. Write. Write. Edit. Write. Write. Finish.

Fortunately, local reporters and editors volunteered some of their Saturdays to support students throughout the reporting process.

A special thanks to all of those dedicated journalists, including Libor Jany, Erin Golden, Katie Humphrey, Fred Melo, Cristeta Boarini, Grace Pastoor, Marcheta Fornoff and Britta Greene – also known as our dedicated team of “writing coaches,” who work directly with students for three months – as well as Maria Reeve, Mark Holland, Paul Klauda, Phil Pina and Jocelina Joiner – our corps of editors, who help students put that glossy finish on their work. Thanks in part to the incredible efforts of these reporters and editors, ThreeSixty students were able to set a high bar for ThreeSixty Magazine.

And they’re planning to set the bar even higher for the next edition in May.