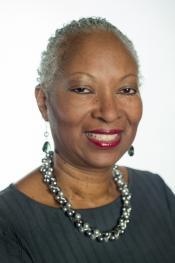 Toni Randolph, editor for new audiences and weekend editor at Minnesota Public Radio News, has joined the ThreeSixty Board of Advisors. Randolph is a longtime supporter of ThreeSixty and its programming, and was the 2014 recipient of the ThreeSixty Widening the Circle Award — given annually to honor an individual who has made extraordinary contributions to the next generation of journalists, particularly while promoting inclusion and diversity.

Randolph is a longtime supporter of ThreeSixty and its programming, and was the 2014 recipient of the ThreeSixty Widening the Circle Award.

“I’m excited about serving on the ThreeSixty board,” Randolph said. “It’s another way that I can help students who have an interest in journalism.  The young people who are involved with ThreeSixty are smart, talented and enthusiastic about their work. They have a strong desire to learn, and it will be my honor to continue to work with them in their classrooms and workshops and, now, in my role on the board.”

Randolph, an award-winning journalist, has been with Minnesota Public Radio since 2003. Prior to her current assignment, she was a reporter covering a variety of subjects, including homelessness and immigration.

“We’re thrilled to have Toni join us on the ThreeSixty Board of Advisors,” said ThreeSixty Executive Director Chad Caruthers. “She is passionate about ThreeSixty and committed to creating opportunity for our students. Both she and MPR are great partners and supporters, and we’re grateful for that.”

Before moving to Minnesota, Randolph worked at WBUR-FM in Boston for more than seven years. She covered Massachusetts politics, airport security and the clergy sex abuse scandal. Randolph began her public broadcasting career as news director at one of her hometown public radio stations in Buffalo, N.Y., shortly after earning her M.S. from Columbia University’s Graduate School of Journalism.