After a day jam-packed with social media insights from their peers, our students returned home with more knowledge about how to best share their opinions and represent themselves on social media.

ThreeSixty Journalism’s first-ever Youth Social Media Summit, supported by Youthprise and in partnership with College Possible at Harding High School, took place on Saturday, Feb. 27, 2016. About 30 students from Harding joined 20 ThreeSixty students at the University of St. Thomas to learn more from their peers about social media and how to use it wisely and effectively for personal and professional purposes in our digital-focused world.

The day kicked off with a lunch, in which Ryan Blake of University of St. Thomas Office of Admissions spoke to students about St. Thomas and social media, and was followed by a talk with Puke Rainbows Creative owner Erica Hanna. Hanna shared how her background shaped who she is and what she does, overcoming the odds as she grew up in poverty to winning Emmy awards during her successful career in video. Today, she owns her own business, creating successful social media campaigns that make a difference in others’ lives.

Hanna said her many accomplishments over the years have been the result of a lot of hard work, and she encouraged students to leverage their social media channels as a way to connect with others.

“Invest your time in relationships,” Hanna said. “People will notice.”

Hanna also wowed the crowd by bringing out her Emmy award – inspiring oohs and ahhs from the crowd – and taking a group “selfie” at the end of her speech. Needless to say, our Social Media Leaders and volunteer Social Media Pros were just as awed by her speech as our visiting students.

Then, students broke into three groups to learn more about several aspects of social media, both for personal and professional use. 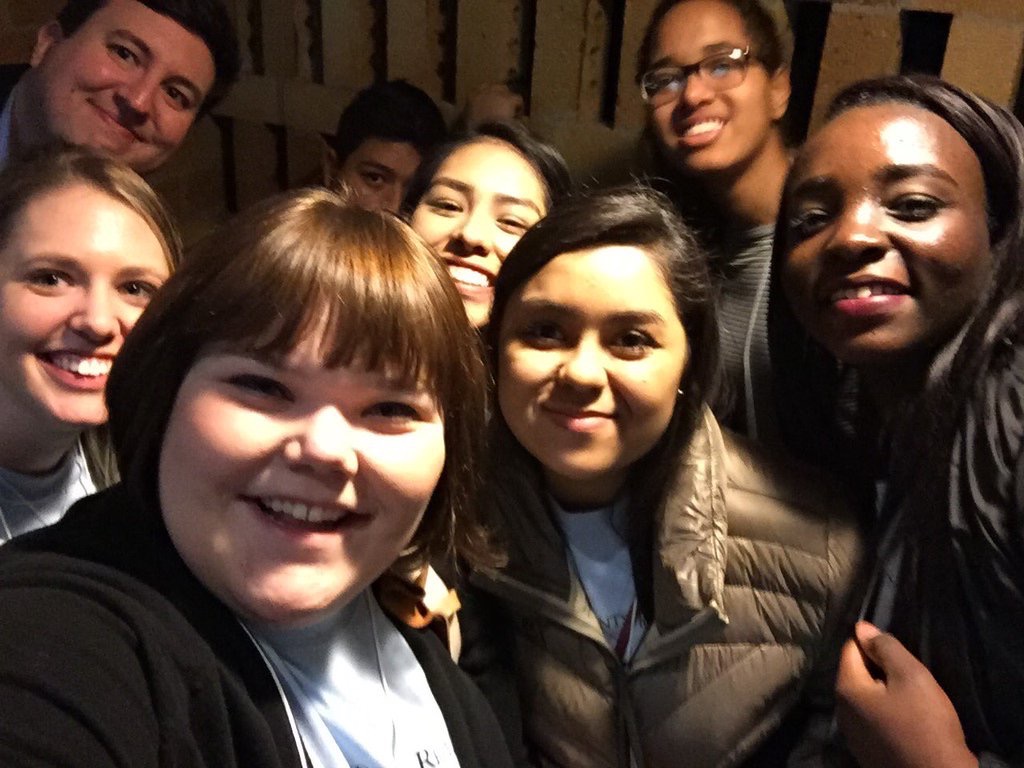 Garcia and Robles-Olivar explained the difference between activism and online “slacktivism,” or using hashtags and posts to show your support for a cause or issue – but not participating in real life. Students moved around the room and discussed which platforms they used for promoting causes and issues, as well as effective activism and slacktivism campaigns they’ve seen recently. No matter which causes or platforms they were interested in, students gained a deeper understanding of both terms and how to make their voices heard. 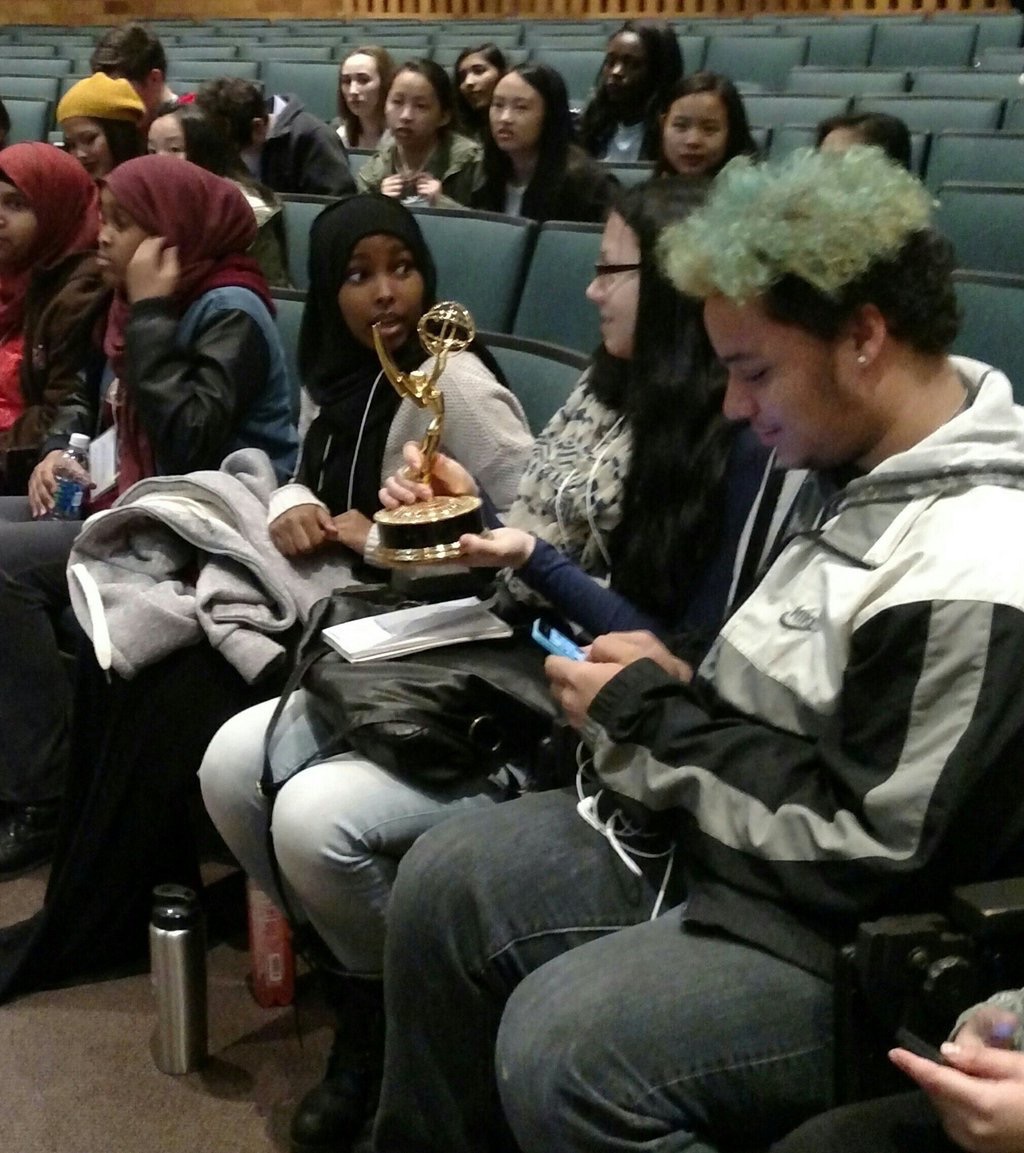 Another breakout session was presented by Social Media Leaders Alejandro Herandez and Kristy Ornelas on “Building a Brand and Connecting.” Social Media Pros Chad Caruthers, executive director of ThreeSixty Journalism, and Erin Lilliencrantz of Bellmont Partners assisted with the session.

The Social Media Leaders led students through a game on Kahoot, an online polling program. Hernandez and Ornelas picked several recent tweets from prominent brands and celebrities, and asked how students would react if those tweets – some controversial, some funny, some thought-provoking – showed up in their timeline. Responses varied from tweet to tweet, but students in turn began to think about how their posts represent who they are on social media channels – as well as how others may react to their posts. 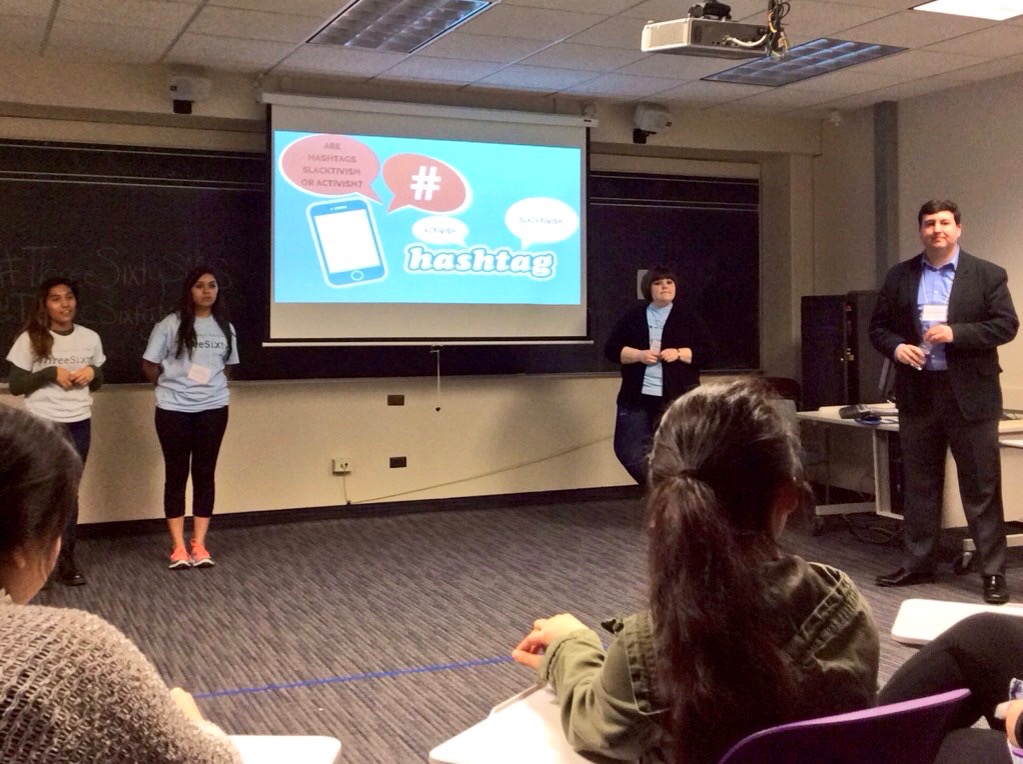 Sabal, Akoto, Algazi and Delgado explained the many components of a social media campaign, showcasing examples from major brands to highlight each aspect of a campaign – how to best use posts on different social media channels to highlight content such as videos, photos and customer reviews. Students had the chance to discuss what parts of the campaigns spoke to them, and how effective the campaigns were at “selling” the advertised product.

After a day jam-packed with social media insights from their peers, our students returned home with more knowledge about how to best share their opinions and represent themselves on social media, as well as the components of an effective social media campaign in a professional setting.

Thanks to all who attended and participated, with special thanks to featured speaker Erica Hanna of Puke Rainbows Creative, and to Youthprise and College Possible. ThreeSixty is also grateful for our social media professionals from Bellmont Partners, Sprinklr, Minneapolis-St Paul Business Journal, and Weber Shandwick, all of whom volunteered their expertise and time over many months to help make this day happen.

Johanna Holub is a public relations professional with Bellmont Partners.