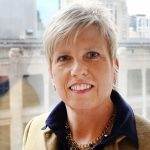 “The kids are so sharp and a great burst of energy, and helping aim them toward a bright future in news is an honor.”

“I’m delighted to have the opportunity for an up-close role with ThreeSixty,” Stoxen said. “In connecting with the program via the Star Tribune, I’ve seen how dedicated the staff is to mentoring a new generation of journalists, which we truly need. The kids are so sharp and a great burst of energy, and helping aim them toward a bright future in news is an honor.”

Stoxen joined the Star Tribune as a copy editor in 1987, when the Twins landed in the World Series. She has worked as the newsroom’s Front Page Editor, Nation/World Editor, Deputy Metro Editor and NewsBreak video host. She is responsible for news operations, including personnel, hiring and recruitment, and coordinates companywide with Human Resources, Finance and News Production.

Board of Advisors Chair Duchesne Drew has known Stoxen for more than 20 years and worked closely with her at the Star Tribune.

“Colleen is one of my favorite people,” Drew said. “She’s smart, passionate and positive about the future of journalism. I’m thrilled she’s going to devote her time and talent to ThreeSixty.”

Before working at the Star Tribune, Stoxen was a copy and layout editor at the South Bend Tribune, Modesto Bee and a reporter at the Grand Forks Herald. She has a journalism degree from the University of North Dakota and grew up in Bismarck. She and her husband, John, live in Woodbury but enjoy traveling to visit their three grown children in San Francisco and South Bend.