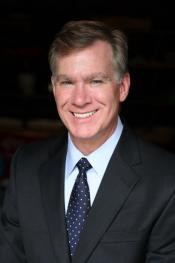 Editor’s note: This marks the seventh installment of ThreeSixty’s @16 series, where our teen writers interview Minnesota newsmakers and difference makers about life as a 16-year-old high school student.

It’s almost cliché to say that St. Paul is the city of neighborhoods. But for longtime mayor Chris Coleman, this statement rings true to the city’s spirit.

Having lived in various parts of St. Paul, Coleman knows the community like the back of his hand. The classic, historic and still changing aesthetic keeps him in the position he loves.

While at Cretin High School (now Cretin-Derham Hall), serving as mayor of his hometown wasn’t even on Coleman’s radar. Yet having been mayor since 2006—winning his 2013 election by a landslide margin—Coleman said he couldn’t love his job or city more.

By upholding characteristics like persistence, cooperation and leadership, Coleman said he prides himself on making St. Paul “the most livable city in America”—a slogan touted on the city’s official website.

However, even Coleman knows there’s a long way to go. His primary issues to tackle in the next four years are the achievement gap and making St. Paul more environmentally friendly.

The best part of my job is when people reach out to me to thank me for something that I didn’t even know was directly impacting them. But because of the policies we’ve put in place, they’ve been helped out. Talking to a mother whose child was able to go to an early childhood kindergarten program because of a scholarship we gave out. Those are the stories I love hearing.

With Coleman’s hard work and passion leading the charge, the idea of St. Paul being “the most livable city in America” is a lot easier to believe.

I went to Cretin High School, so it was an all-boys military school. That was a little bit of an unusual experience. And my parents had just gotten divorced, so we moved from the house I had grown up in to a house out in Como Park. It was kind of hard because all of my friends were in one area, and I was out in a different one. It was hard to adjust to that kind of change, but you know, high school has its good points and its bad points, so that definitely was true for me.

What has changed about the area you grew up in? Is it any different now?

I grew up in a bunch of different parts of St. Paul. West 7th Street originally, then the place where I went to first grade and kindergarten is where my kids went to elementary school, so I still go into the room that I used to go to class in. It was kind of funny going in there and thinking that I’d gone there myself. That area around West 7th is very similar, a more working-class neighborhood with bars and restaurants. The nice thing about St. Paul is that it changes a little bit, but most neighborhoods have stayed fairly similar over the years.

What were you interested in during high school? Would you have been surprised by what you ended up pursuing?

I think I always knew that I wanted to do politics. I was always interested in politics because I grew up in a very political family. I certainly never imagined being mayor. That was not something I thought about. But I had a teacher in sixth grade who really helped me believe in myself and said “you can be whatever you want to be,” so I decided early on I was going to go to law school. And then grew an interest in politics. That was the easy part, figuring out what I wanted to do. Once I got there, it became harder.

Since you never envisioned being mayor, what was the path that eventually led you here?

When my wife and I moved over to the west side, she got involved in some neighborhood issues over in the Frogtown neighborhood, and we lived there for eight years. I started getting more into neighborhood issues and city issues, as opposed to statewide issues. Then I realized that the issues I was really interested in were city-based, and that I was very passionate about the city of St. Paul. I decided I could do a lot more for the city as a city council member than as a state legislator, so I ran for city council and the rest is history.

You’re very passionate about the city of St. Paul. What part of the city has had the biggest impact on you?

Each area has a distinct feel to it. Maybe what makes me a better mayor is that I’ve lived in so many different neighborhoods. I love the historic charm. I love the fact that I can look out of my window and see eagles flying above the Mississippi River. St. Paul, it’s an accessible city, it’s charming and it has a big city feel to it and a small town feel to it all at the same time.

You and former Minneapolis mayor, R.T. Rybak, have maintained a great relationship between the two cities. What was the working relationship like, and what are your future plans with the new mayor, Betsy Hodges?

I have a very good working relationship with Betsy. I knew her for many years when she was on the city council. I consider her a friend, and I think she has a really deep understanding of the fact that our region is better if the two cities are very cooperative. And that’s what Rybak knew too, that when the cities work together instead of competing against each other, then it puts us in a better position to compete against other regions in the country and across the globe. It’s really important that the two cities work together toward a common goal. It helped us get the light rail line built, and we’re going to continue to work together with the new mayor as well.

What has had the biggest impact on you as you’ve continued to serve as mayor?

I think just realizing the impact you can have on people’s lives. It’s something I feel like I understood intellectually, but never emotionally. Then you come into this position and realize how dependent people are on your understanding of their challenges and how you can help. The best part of my job is when people reach out to me to thank me for something that I didn’t even know was directly impacting them. But because of the policies we’ve put in place, they’ve been helped out. Talking to a mother whose child was able to go to an early childhood kindergarten program because of a scholarship we gave out. Those are the stories I love hearing.

Another issue you’ve been at the forefront of is closing the achievement gap. What drove you to pursue this issue?

While a lot of kids in our city have the tools they need to be successful and are getting a great education, too many of our children aren’t getting the same resources. Our dropout rates are too high. The number of kids failing classes, and the amount of kids not going to post-secondary schools like colleges and universities, are too high. Now, it’s a moral imperative that we create opportunities for people and close the opportunity gap. It’s also important from the city’s standpoint that we have trained workers, an educated work force, and people that can take jobs in the 21st century economy. If we don’t do that, it would be hard for big companies in the area, because if we aren’t training the workers or providing a good enough education, then these companies will go elsewhere. It’s important for a lot of different reasons.

What do you think of social media and the role it plays in community outreach?

It’s critically important. I think Twitter has become one of the best, instantaneous sources of news. If it’s an election night, you know who won immediately. Some people are concerned about the overuse of social media, but I think of it as an outlet for information that you otherwise wouldn’t have access to. I think people should be more reliant on the daily newspaper than they are, but if I get up in the morning and I start reading tweets, I may get a link to an article online. People can get lazy and rely too much on the 140 character tweets, but in the end it can be used pretty productively.

If you were to have one day to yourself in St. Paul, how would you organize it?

Oh, that’s hard. I would probably start off with a bike ride on some of the trails that we have, then I’d have breakfast at Mickey’s Diner. This way I can work off my Mickey’s breakfast before I even have it. Then, I’d go to an event at the Science Museum or the Children’s Museum. I might go for a walk down the river or Summit Avenue, go to a Wild hockey game or a concert at the Xcel Energy Center. Then lastly, I’d go back to Mickey’s.

What are some of your favorite restaurants in St. Paul?

It’s always hard to pick. I grew up going to Mancini’s, so I would go there. Skinner’s Pub has great pizza. Every time I mention a restaurant, there are like ten others I should mention. It’s very dangerous for a mayor. There’s Blue Door on Selby. There’s the St. Paul Grill. There are so many restaurants, and it’s my job as mayor to go to as many as I can, as often as I can.

What’s the coolest thing you’ve ever done as mayor?

I got to see Mick Jagger at the White House. That was pretty cool. I also got to meet Bruce Springsteen.

Best advice for teenagers: “A path to success is not a straight line. There will be a lot of stops and starts in a lot of different directions. The number one thing that I say to people is to believe in yourself, be persistent, and don’t let failure get you down. You also have to have a sense of humor.”