This story was produced during ThreeSixty Journalism’s 2020 Digital Media Arts Camp, in partnership with the Center for Prevention at Blue Cross Blue Shield of Minnesota  and Padilla. Health equity was the theme, with a focus on racism as a public health issue. 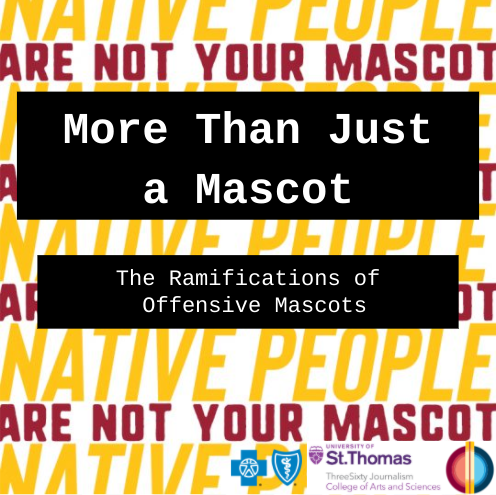 I interviewed Leah Salgado who is the deputy director of IllumiNative.

IllumiNative is a racial and social justice organization.

They use narrative change to amplify Native voices, combat negative narratives about Native people and build visibility for Native Americans.

A large focus of their organization is eliminating mascots that depict Native Americans.

From high school to the pro level, there is still a ridiculous amount of offensive team mascots and names against Native Americans.

During the creation of this project, I came across many technical issues, including all my work and programs crashing, multiple times. It was incredibly frustrating. Eventually, I ended up editing most of my project from my phone. All of the technical difficulties were one of the hardest parts of this project for me.

I also learned the important lesson to record on more than one device, as my computer’s recording of the interview was not as high quality as I would have liked. It also picked up a lot of background noise I needed to  edit out of the recording.

I’d like my listeners to take away a new passion for eliminating these mascots. I want them to now be informed on how these caricatures and names go far beyond just being a mascot, and how they negatively affect Native American people.

My biggest takeaway from this project is that although I knew offensive mascots had a large negative effect on the Native community, it is even deeper than I previously thought.

Native American youth are seeing their identities and culture mocked, appropriated and diminished in their own country starts at birth.