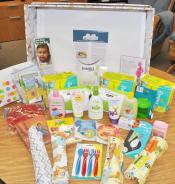 When Danielle Selassie saw a story about a Finnish tradition of giving pregnant women small cardboard boxes to use as bassinets, she was inspired.

When you deliver a box to a mother, you can see the relief in the mother’s face and can tell a bit more relaxed. –Melanie Faulhaber

Selassie got pregnant at age 19 and knew what it was like to need help. In the end, she put her child up for adoption, but the experience gave her more empathy for young mothers.

That’s why last year she created Babies Need Boxes, a Twin Cities metro-area nonprofit that provides teenage mothers—many of whom live in risky situations with minimal support—with cardboard baby boxes filled with supplies to get them on their feet. The goal is to help equip mothers with the tools and resources necessary to transition to parenthood.

But these packages are more than just a box. They look like office filing boxes, decorated with baby prints. The cardboard boxes are certified bassinets—safe beds for infants through their first nine months—packed with diapers, baby wipes, ointment, baby books, utensils and more. The boxes also include a waterproof mattress and safe sleep literature for parents.

“Nowadays people think you need the most fancy things, but that’s not the case,” Selassie said. “You need two arms, breastmilk, a safe place for them to sleep, and it can be very simple, as simple as a box.”

For more than 75 years, the Finnish government has provided pregnant women with a decorated box of baby supplies, lined with a mattress and a fitted sheet to also be used as a bed. Struggling with high infant mortality rates, Finland began giving away the boxes in the 1930s. The country now has one of the world’s lowest infant mortality rates, according to the BBC.

Selassie began collecting baby supplies for teenage mothers at Longfellow Alternative School. After delivering boxes to Longfellow, Selassie decided to expand the program statewide and to Iowa. She connected with organizations and schools to get funding.

“The more that we can do to show people that they have support and build them up, the more successful they are going to be,” Selassie said.

Selassie’s company has since partnered with more than 20 nonprofits, two hospitals and multiple schools in Minneapolis.

Melanie Faulhaber, a parenting and pregnancy teacher at Longfellow Alternative School and a board member at large for Babies Need Boxes, said when Selassie delivered the first boxes, her approach with the young women was soft and sincere.

“When you deliver a box to a mother, you can see the relief in the mother’s face and can tell she is a bit more relaxed,” Faulhaber said. “I see it every time Selassie comes to my classroom.”

Now, more community members and churches are helping make bibs, collecting items for the boxes or putting together the boxes.

“I want to cover the U.S. in baby boxes,” Selassie said, “because every mother deserves a box.”