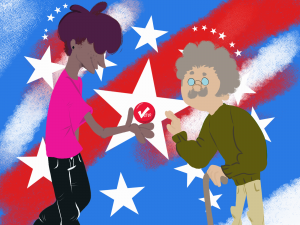 It’s 10:30 a.m., March 14, 2018. Snow covers the ground, and of course no one brought a jacket. Hundreds of students have walked out of class carrying signs and loudly protesting. We’re demanding gun control; we’re pleading with our elders to let us live and be safe in our schools.

A weird mix of pride and fear was raging through me during the entire protest. I don’t only want gun control for myself, but for my brothers and sisters throughout the United States who are being personally affected by school shootings.

Issues like gun control, equal rights, immigration policies and climate change directly affect the future of my generation. The next presidential election could determine how these situations are addressed legally, and I should be allowed to vote and influence the outcome.

There’s currently a debate about voting age, a reflection of the early 1970s protests for the passage of the 27th Amendment, which lowered the voting age to 18. Their protest started with the Vietnam War, an issue that affected many teens during that time.  Nowadays many student-led movements are fighting to bring the voter age down to 16.

Being an active member of society is more than just having a job and paying taxes. Through volunteering, actively attending school and participating in global events, I exercise more of my First Amendment rights daily than some of my predecessors did. The day-to-day work done by college students to the passage the 27th Amendment didn’t make the news in details. Modern day protesting has drastically changed with the Internet. Online communities allow organizers to share the message with a wider audience quicker than ever before.

All this online support directly fuels protest crowd sizes; an estimated 800,000 people showed up to Washington, D.C., for the 2018 March for Our Lives Protest, making it one of the largest protests in American history, according to USA Today.

Extinction Rebellion became one of the most well-known climate strikes around the world after the London chapter shut down the city’s busiest routes for 11 days and over 1,100 protesters were arrested, according to BBC News.

These two protests provide a small look at how youth actively participate in social issues that are ultimately decided by politicians in office.

By not allowing those of us under the age of 18 to vote for our representatives, we aren’t able to elect people who will make changes in Congress to better help our future.

I’m going to be one month shy of the legal age to vote in the next presidential election, but my future will still be greatly affected by the outcome. Being allowed to vote would grant me the ability to participate in the democracy we hold so dear. Not being allowed to will probably leave me swimming in student loans.