Editor’s note: ThreeSixty has changed the name of a minor in this story because of privacy concerns.

Darrell Thompson has few doubts that he’s running one of the best youth mentoring programs in the United States. Now, he wants to make it better.

Since leaving the National Football League two decades ago, the former University of Minnesota running back and Green Bay Packers first round draft choice has been focusing on a goal even tougher than tackling linebackers. He’s trying to get at-risk kids in the Twin Cities engaged in running, biking and healthier lifestyles.

Bolder Options, which started in 1993, partners kids ages 10 to 14 with adult mentors who prepare them for a series of foot or bike races. The running and biking aspect of the program aims to help kids live healthier lifestyles and make better adolescent decisions.

After his career in the NFL, Thompson started out as an employee. Over the years, he has mentored several students and become president of the organization.

“When I was growing up, I had been involved with young people,” Thompson said. “I saw young people at my house. Both of my parents were mentors to kids in the community. So I saw that as the norm, and I thought that maybe I would want to do that when I got older.”

The program enrolls students who have had some contact with the juvenile justice system, for instance, kids who have repeatedly missed school.

“In the beginning, we had to recruit kids,” Thompson said. “I had some friends that were social workers, counselors and probation officers. I would go and talk to them … now we get referrals for as many as we can handle.”

Around 80 to 90 percent of kids that have been part of Bolder Options do not enter back into the juvenile criminal system, Thompson said. Also, 72 percent of the kids that enroll finish the year-round program. The national average for mentoring programs is 40 percent, Thompson said.

He believes the lower recidivism rate is because of the amount of time mentors spend around students. The mentor is not allowed to spend any money on the kids. Rather, the program is focused on building personal relationships, not how much money can be spent.

Few days go by without kids seeing their mentor or another advisor, and the program goes beyond athletics, encouraging healthier habits in all aspects of their lives.

Matthew, 10, of North Minneapolis, entered the program about six months ago at the urging of his mother. David Jones, a trained physiologist and former operations director at Maple Grove Hospital, grew up in the same neighborhood and wanted to give back. So he became Matthew’s mentor.

In addition to running together on a regular basis, the pair plans to go rock climbing, tubing and fishing, Jones said. Matthew has also set a goal of going to college, and Jones plans to take him on a tour of the University of Minnesota.

The tandem also went skiing at Hyland Ski Area in Bloomington, where Matthew set a lofty goal for himself.

“By the end of the day, (Matthew) and I were going up the chairlift and skiing down runs, and I thought his goal was to not fall more than five times on any single run down the mountain,” Jones said. “His goal was not to fall five times that day.”

So how many times did Matthew end up falling?

For Thompson, there’s always room for improvement within the program. He wants an expanded presence in St. Paul. There are also around two dozen mentors in the metro area, a number he wants to see doubled.

So far though, Thompson likes the results. Many of the students come into the program with a lukewarm attitude—largely those who have been referred, he said. That changes over time.

The immediate goal is to get them excited about running or biking, but the real focus is long term. Bolder Options believes that its students will make positive choices once they start learning about their potential to set and attain realistic goals.

“We would like them to finish high school. Have them finish college. And hopefully have them find a career,” Thompson said. 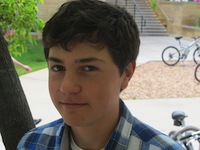 Patrick Commers is a junior at St. Paul Academy and Summit School. His story on Bolder Options is part of a package by 12 high school students who participated in ThreeSixty Journalism’s residential Intermediate Camp from June 15 to June 27.