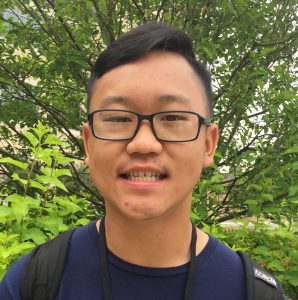 Every time I visit my grandparents in their huge house in Blaine, I hear a broken record.

I understand my parents, grandparents and others only want the best for me and my future, but I will show them that helping many people and earning a good living wage is not just limited to doctors and lawyers.

“I’m so happy you’ll go be a doctor so you can take care of me,” my grandma would say in her broken English.

“You have to work hard in school to be a doctor and make a lot of money,” my grandpa would say in his sturdy Hmong accent.

As a second-generation Hmong, I’m expected to become a lawyer or a surgeon. When my aunts and uncles failed to fulfill these expectations, the pressure fell on me and my generation.

Ever since I mentioned to my uncle I might consider working in the medical field, my whole family has been pushing me to become a surgeon. I grew motivated and determined to prove to them I could do it.

At a recent family graduation party, I realized that’s not really what I want to do.

It was a scorching hot and humid day. Everyone was drenched in sweat and dressed in formal attire. The humid air was tangible. Makeup melted off women’s faces, and those who wore high heels struggled.

Inside the banquet hall, the keynote speaker, a distant relative, approached the stage.

“Great, another boring and overdrawn congratulatory speech,” I thought to myself. The deafening screech of the microphone interrupted. Everyone became silent. A man in his 50s, dressed in a suit, stepped up to the podium. He kicked off his speech by introducing his term of a “talented loser.”

My ears perked up.

“We, Hmong people, have a lot of talented losers,” the keynote speaker, Kong Meng Lee said. “You know what that means? It means we have a lot of people in the Hmong community that do not take initiatives, and the first step to being successful is to take the initiative to get things you want.”

My freshman year, I desired to study business, but challenging math courses scared me away.

Listening to Lee, I realized one initiative I failed was enrolling in difficult math courses, ones needed for a business career. I regret not challenging myself, so I have signed up to take IB Math Studies my senior year.

I kept watching and listening intently.

I learned Lee was pushed to become the first doctor in the family, just like me, and he also was unsure about what he wanted to do. Hoping to fulfill his parents’ wishes, he attempted to obtain his doctorate degree, but then realized it was not what he desired.

Instead, he pursued a career in business because he wanted to help people financially. Specifically, lower-income people.

By rejecting Hmong social career standards, he was capable of doing what he loves most and earn money at the same time. He is now making six figures as a financial advisor.

“Don’t let people tell you what to do or what to become in life,” Lee commanded.

As the audience applauded and Lee exited the stage, I instantly felt a jolt in my spine that ran through my shoulder blades. The heavy boulders on my shoulders were lifted off, and I felt like I was free from a prison that caged my dreams.

I understand my parents, grandparents and others only want the best for me and my future, but I will show them that helping many people and earning a good living wage is not just limited to doctors and lawyers. I plan to study business at a four-year university and educate low-income families, like my own, to save, invest and make financially sound decisions.

Lee’s first step was to break through those standards. I am ready to take that step, too.