I never had an older sister. I barely had a mother.

The only womanly examples I had in my life were weave and press-haired black girls and teen pregnancy stricken family members. So all I wanted to be was white.

In books, these women with silky blonde hair are always described as fair-skinned. Why is their skin “fair”? Porcelain, like delicate china. Is my skin not delicate and fair?

These were the questions that filled my mind as my mom braided my hair with beads every month, or straightened and relaxed it—which was my favorite.

All I wanted was straight hair, like the white girls. If only I had white parents, life would be better. I’d live in a better home, my parents would be together and I could do whatever I wanted.

These were the thoughts that filled my mind as my mom yelled at me for having an Afro when I came home from my dad’s for two months at the end of summer.

The thought process and obsession to be anything but myself lasted until my freshman year of high school. After learning about who I am, my culture and my new Afro, I began to appreciate myself more.

Other black girls would ridicule me for my hair, asking me when I was going to straighten it. In black American culture, women object to the “natural” look, especially an Afro since it’s their understanding that black men do not like girls with Afros. To most black men, an Afro is masculine—which then became a preconceived notion that black women passed on to younger generations.

And then there was the uncomfortable fact that white people constantly touched my hair, all of which gave me doubts. But I was making a statement, and soon people listened.

This summer, I was crowned a 2014/15 St. Louis Park Parktacular ambassador. I wanted to join the program to represent the diversity of St. Louis Park and to be an example for girls who feel like I felt growing up. Considering there wasn’t a black Disney princess until 2009, I wanted to be the example of someone who looks like them with a crown on. They are all princesses or queens no matter their skin color.

My example isn’t just for black girls, it’s for everyone. People don’t expect a black girl to be on a parade float with an Afro underneath her crown. I even attempted to Google search “black women with Afros and crowns” but found no images. There are only about five black girls that I’ve seen out of more than 20 royalty/ambassador programs.

I also want to be a role model for my junior ambassadors as a young woman who is poised, smart, caring, projects when speaking, has personality and loves to smile. Even though I already have five siblings of my own, I feel like I’ve added three more. I know that my junior ambassadors look up to me.

I take pride and joy in being a strong example, and I believe that is a meaningful contribution through my community involvement in St. Louis Park. When I’m on a parade float, the smiles on the little girls’ faces when I blow them kisses truly leaves the best feeling.

Living the saying “be the change you want to see” has liberated me from self-loathing to the best kind of self-loving. 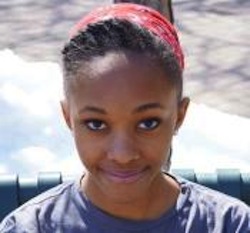 Amira Warren-Yearby, a senior at St. Louis Park High School, is a 2013 graduate of ThreeSixty’s Intermediate Summer Camp. A senior reporter who has written about race, religion and technology, Amira was one of 42 teens selected to the Asian American Journalists Association’s prestigious J-Camp in Boston this summer. She also produces videos for The Echo, St. Louis Park’s high school paper, and serves as a St. Louis Parktacular ambassador.