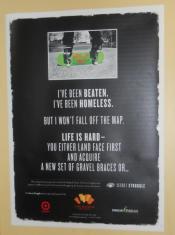 No one knows how fortunate he or she is until something bad happens. This is particularly true in the context of a homeless teenager.

I did not realize how fortunate I am until I interviewed two young people who had been homeless over a number of years. Nobody I have known has been homeless for an extended time, so I knew only a little about the topic when I started reporting the article. I had plenty to learn. My interview with two homeless youth was sad, as I expected, yet surprisingly optimistic.

Both Shequita and Marcellous smiled periodically while sharing their hard stories. Shequita’s accomplishments while homeless were especially inspiring. She did not simply wander the streets like many of us might think. She graduated from high school, raised a son, and maintained a part-time job while displaced. I learned that many young homeless individuals are not vagrants—they just need help to get by and eventually prosper, like you and me.

Since that interview in January, I have also considered what I take for granted. The Internet is a simple example. The “infobahn” is growing unlike anything else, yet is not available for everyone. I am blessed to have access to the Internet at school and at home. While I’m planning for prom, graduation and college, homeless teens like those I interviewed have great difficulty looking beyond the day at hand. They are fixated on daily survival—finding their next substantial meal, bed for the night or warm jacket.

Fortunately, school is a safe haven for a majority of Minnesota’s homeless youth. In 2012, 69 percent of homeless teens who were 17 and younger, and on their own, went to school the day they were surveyed. This stunned me because it requires managing school and everything that comes with it while living in a shelter, with a friend or on the streets.

I also learned that homelessness can happen anywhere. I didn’t realize that even students at my school—Cretin-Derham Hall—have become homeless, usually when their parents lose jobs or lose their houses. Knowing this made my piece much more personal, and made clear that no place is entirely immune.

I also learned that being homeless is often much more than a financial matter for teens. Teens are typically not on the street corner holding a paper placard—they tend to loom in the shadows. Like Shequita and Marcellous, most homeless youth have severe conflicts with their parents or impetuously choose to be independent before they can handle the responsibility. I cannot imagine trying to be a typical 18-year-old while couch hopping.

The Wilder Foundation’s research manager, Michelle Gerrard, believes that we are obligated to serve the disadvantaged in society, especially homeless people. As a person of faith, I share the same conviction, which was a big reason I wanted to write the teen homelessness piece.

Cretin-Derham Hall emphasizes loving “our dear neighbor” without distinction, and that has helped shape my beliefs. One of my primary goals as a reporter is to raise awareness about issues like teen homelessness. The topic may sound foreign, as it did for me, yet it is happening in our midst.

So be aware if you see a classmate struggling. Simply speaking up and reaching out to them can go a long way.