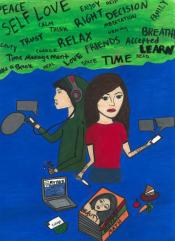 “There’s never one thing that leads somebody to suicide.”

“Honestly, when we found out the news, it was a complete shock.”

“It was legitimately heart-breaking, and that’s something I do not say very lightly,” Pierce-Ramsdell said.

Nobody who knew Pierce-Ramsdell’s friend at Blaine expected he would be one to end his life. There were no warning signs, no obvious reasons to his closest peers.

“He was always the happiest person in the room,” she said. “He would be the kind of person (who) would light up the entire room for you.”

But that did not stop the 17-year-old from becoming one of the thousands of American teens to commit suicide every year. Despite suicide and bullying prevention efforts aimed at raising awareness, Minnesota high school students are still committing suicide. But fellow teens never hear the reasons why.

“There is never one thing that leads somebody to suicide,” said Melissa Heinen, suicide prevention coordinator with the Minnesota Department of Health. “People talk a lot about bullying as a contributing factor … It is more complex than that.”

Heinen said there are two kinds of factors that affect a child’s development: Risk and protective factors. While risk factors—being a victim of physical or sexual abuse, coming from a broken family and the use of drugs and alcohol—may contribute to a child’s sense of unhappiness, protective factors help children lead happy, meaningful lives.

“Protective factors for youth are feeling connected, having a support system, feeling liked at school. There is something about social connectedness,” Heinen said.

The American Academy of Child Psychiatry released a study showing that children who feel a sense of belonging are less likely to commit suicide than those who do not. According to the organization, “for some teenagers, divorce, the formation of a new family with step-parents and step-siblings, or moving to a new community can be very unsettling and can intensify self-doubts … suicide may appear to be a solution to their problems and stress.”

“A disconnect that a teen may feel from any group they feel a sense of belonging to certainly can lead to thoughts of suicide. We all have a sense of belonging, whether that is to our family, school, community, religion, sports team, etc.,” said Carrie Burk, an Anoka County social worker. “And if a teen’s sense of belonging is hindered by a problem within their identified ‘group,’ that is where, intrinsically, teens start to think ‘something is wrong with me.’”

“One in ten high school students will think about suicide sometime during their four-year career,” Heinen said. So during the teen years, more than ever, they need friends, family members and a community to support them physically, emotionally and spiritually.

“Many kids are bullied and do not commit suicide. It may be a piece of it, but not the whole explanation. There are other pieces beneath the layers … Bullying is often just the straw that broke the camel’s back,” Heinen said.

But if it really is just about bullying, there are organizations in the Twin Cities that advocate specifically for bullying and harassment prevention at schools. Outside of her work as a social worker, Burk assists Green Dot, an organization that provides training to schools like Blaine High School—Burk’s alma mater. Prevention is aimed at teaching communities how to be active bystanders, she said.

After Burk’s 12-year-old brother committed suicide following several bullying incidents on a school bus, Burk vowed to fight for victims who couldn’t speak for themselves.

“I am a believer in ‘it takes one person to change a life’ … No family should ever have a story like this. It’s a complete nightmare that you cannot wake up from,” Burk said.

So what are the warning signs that can allow teens to be active bystanders?

“If you notice a change in behavior in a friend, isolation, change in appearance … losing interest in things they used to care about … please tell an adult,” Burk said.

And if somebody tells you he or she is depressed or is considering suicide, Heinen advises to “take it seriously.” At the same time, teenagers should not get carried away with their help.

“You are not the solution to someone else’s problems. You are just helping that person find the solution, which is the professional,” Heinen said.

“Your job is not to become their counselor. Just be their friend.”

Fortunately, teenagers have a plethora of resources to take advantage of if they are facing problems. Besides consulting with trusted family members and friends, students are encouraged to speak to their school counselors, who are trained to help teens cope with problems.

There are also organizations like Suicide Awareness Voices of Education (SAVE), headquartered in Minnesota, hotlines like TXT4LIFE, which offers help for teens via texting “LIFE” to 61222, or the National Suicide Prevention Hotline at 1-800-273-TALK.

“Whether you want to have somebody talk to you in a coffee shop or prefer to get help anonymously over the phone, there are a lot of great resources all over the state of Minnesota,” Heinen said.

As for how schools typically handle suicides, Heinen said that school officials often cannot discuss personal suicide stories for legal purposes, which can frustrate teenagers seeking transparency. They care about their students, she said, but have to respect family privacy. That’s where outside resources can be helpful, especially if teens need to talk.

As a teenager who continues to deal with grief, Pierce-Ramsdell’s advice for her peers is simple.

“We need to work together rather than continuously compete against each other,” she said, referring to the potential for high school drama to create enemies instead of friends.

“It makes it harder to get through (life) without having other people on your side.”

Everyone plays a role in suicide prevention—which is why the Minnesota Department of Health encourages everyone to know the warning signs of suicide.
• Talking about wanting to die
• Looking for a way to kill oneself
• Talking about feeling hopeless or having no purpose
• Talking about feeling trapped or in unbearable pain
• Talking about being a burden to others
• Increasing the use of alcohol or drugs
• Acting anxious, agitated or recklessly
• Sleeping too little or too much
• Withdrawing or feeling isolated
• Showing rage or talking about seeking revenge
• Displaying extreme mood swings

If you are concerned that someone is at risk for suicide:

• Ask them if they are thinking about killing themselves (this will not put the idea in their head or make it more likely that they will attempt suicide)
• Stay with the person (do not leave them alone)
• Remove any firearms, alcohol, drugs or sharp objects that could be used in a suicide attempt
• Call the National Suicide Prevention Lifeline at 1-800-273-TALK (8255)
• Take the person to an emergency room or seek help from a medical or mental health professional

For more information and other helpful resources, visit http://www.health.state.mn.us/injury/topic/suicide/. 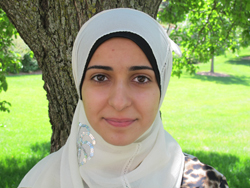 Lujain Al-Khawi is a senior at Blaine High School. She graduated from ThreeSixty’s Introduction to Journalism Summer Camp in 2014. During camp, Lujain wrote about finding identity through religion and American culture for publication. She also interviewed several media professionals for profiles that were published online. She loves to dissect biased media and is active in American-Muslim youth engagement.