For more information about TreeHouse Youth, call (952) 238-1010 or visit treehouseyouth.org.

Editor’s note: ThreeSixty is not using the last names of minors in this story due to privacy concerns.

Two TreeHouse girls are at a table giggling and waiting for their support group to start, unaware that Sally Mixon is sneaking up behind them.

Mixon grabs one of their shoulders, shocking them into a fit of laughter.

To anyone watching, it seems as though they are family. In truth, Mixon is the area director of Mahtomedi TreeHouse.

TreeHouse, a faith-based nonprofit program that encourages teens to confide in adults and other teenagers, began with a simple observation. Fred Peterson, a Robbinsdale High School teacher, noticed that kids in his classroom had extremely low self-esteem—a common problem since many of his students came from dysfunctional families.

It motivated Peterson to quit his job and ask the school’s principal for ten students that if “he never saw again, it would make his life easier.” Peterson’s daughter named the program TreeHouse, noting that for kids, “treehouses are safe places to go.”

“He started building these amazing relationships with kids, and it just started growing,” Mixon said.

Paige, a TreeHouse member, said her parents struggled with drugs. Her father almost lost his painting business and they eventually lost their home.

Paige blamed herself for their drug abuse, so she started cutting as a way to cope with the guilt. After being admitted to the emergency room and going to treatment, she’s four months free of cutting.

TreeHouse was, and continues to be, an important factor in feeling good about herself.

“It’s really important (to me). It’s somewhere I can be myself, and it’s somewhere where people understand you and don’t judge you for screwing up or making mistakes in your life,” Paige said.

“It has basically kept me alive. If I didn’t have Heidi (one of TreeHouse’s youth outreach associates) or Sally to go to, I wouldn’t be here.”

Lauren, a ninth grader, said that TreeHouse has given her a strong relationship with God.

“When I have struggles, TreeHouse gives me other ways to deal with them, other than cutting, drinking or other bad things. I just kind of talk to God now,” Lauren said.

Beyond what TreeHouse has done for her personal growth, Lauren also praised the program’s safe and comfortable atmosphere.

“We’re all a big family. There’s not any judgment here, so we’re all comfortable. It’s not like that at school (for me), so that’s why TreeHouse is such a great place,” she said.

On Mondays, the program is more faith-based, so it looks similar to a youth group that you see in church, Mixon said. The faith messages are meant to “come to life” so they sink in with teens.

Paige recalled a story Mixon shared about a woman with a hemorrhage that lasted 12 years. It was a social norm for a woman to be married, but no man would take her. She was thought of as worthless and isolated. Yet her faith in Jesus compelled her to risk going out in public and touch his cloak. She was healed.

As she continued telling the story, Mixon grabbed a volunteer and told him to put an old T-shirt on. With rubber gloves, Mixon smeared her dog’s feces—collected that morning—all over his shirt. She had him walk through the rest of the kids, observing that they were repelled. That’s how the woman must have felt, Mixon said.

It was memorable, to say the least. But Mixon stressed that the lessons, while thought provoking, aren’t meant to be solemn.

On Thursday, the program is called Support Group. It’s non-faith based and is meant to encourage sharing. The group also goes on “adventure trips,” Mixon said, whether kayaking on Lake Superior, visiting a farm or hanging out at Valleyfair.

“They just get to be kids, something that some of them usually don’t get to do. They had to grow up really fast. It’s about getting them out of that environment, so they can have fun and just giggle,” Mixon said.

Each staff member also has a Care Load, a collection of kids that each mentor takes under his or her wing to “just talk life.” Care Loads are crucial since the majority of teens in TreeHouse don’t have an adult in their life to confide in.

Ultimately, the results show that it works. According to a survey TreeHouse conducts each year through the Wilder Institute, 98 percent of the kids have decreased or stopped an at-risk behavior.

“We live life with them. We pick them up from school. I just took one kid to driver’s ed,” Mixon said. “We’re just kind of parents. We’re mentors, we’re sisters, we’re friends, we’re aunts. We’re whatever it is we need to be.” 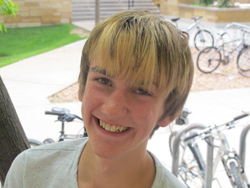 Dillan DeGross is a sophomore at FAIR School Minneapolis. His story on TreeHouse Youth is part of a package by 12 high school students who participated in ThreeSixty Journalism’s residential Intermediate Camp from June 15 to June 27.