Twin Cities high school students became makers and creators with those digital media tools and platforms – and many more – at ThreeSixty Journalism’s 2017 Youth Digital Media Summit on Feb. 11 at the University of St. Thomas in St. Paul.

The event – which aimed to empower teenagers to use digital media wisely, responsibly and effectively to accelerate their future success – was centered around five digital media-focused breakout sessions. The kicker: ThreeSixty Journalism students planned and taught three of those sessions, serving as digital media experts passing along knowledge to their peers.

“There was a lot of thought that went into the ThreeSixty Youth Digital Media Summit,” said Zekriah Chaudhry, a junior at Minneapolis South who helped create one of the breakout sessions. “It takes a lot to create an informative and engaging breakout session, and I think that everyone I worked with really fed off of that challenge.”

“For me, the best part was being able to see how excited the student leaders were to share what they have learned,” Welsh said. “As someone who leverages digital storytelling every day, it’s fantastic seeing the next generation of storytellers diving into the industry – a picture of what is to come!”

Best Buy’s Geek Squad Academy led the Summit’s capstone. Geek Squad Agents helped end the Summit on a high note by teaching students website coding basics, including how to put their own spin on an existing website.

Student participants also learned about and captured 360-degree photography and video during a session at the University of St. Thomas STELAR (St. Thomas E-Learning and Research) Center. Eric Tornoe, associate director of research computing at St. Thomas, led the session, in which students used Theta cameras to take 360 photos and video on campus, and then used the Oculus Rift and HTC Vive virtual reality headsets to get the full effect. 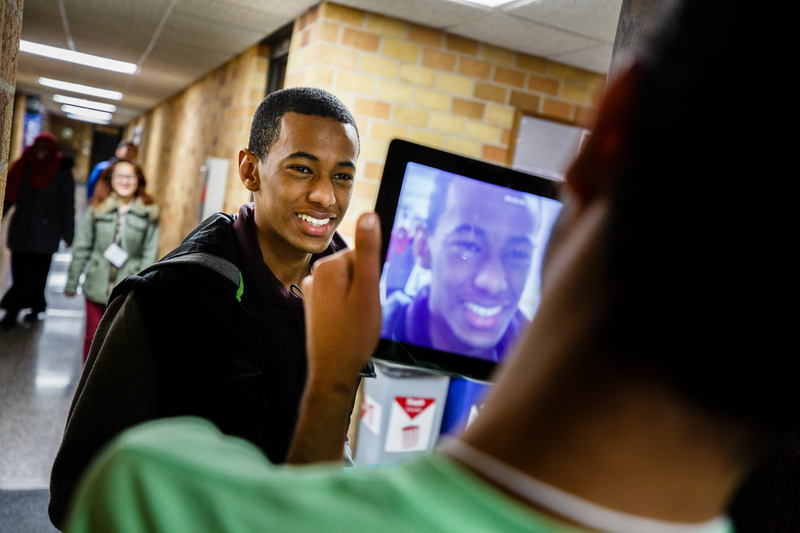 The youth-led breakout sessions were a hit. In one session, titled “How Brands Connect with Audiences Using Instagram and Snapchat,” ThreeSixty students displayed examples of how their favorite brands use the social media platforms to reach their consumers (i.e. Old Navy, the Kardashians), and then sent students throughout the building with iPads to capture Instagram and Snapchat content for the “Youth Digital Media Summit brand.”

In another session, “The World is Watching: The Art of Viral Videos,” ThreeSixty students showed examples of well-known viral videos, such as the “Mannequin Challenge” and the “ALS Ice Bucket Challenge,” discussed what made those videos viral and then helped students create their own versions of viral videos with iPads. Laughter from these activities could be heard echoing throughout the building.

A third breakout session, “Emerging Technology: Telling a Story Through Different Lenses,” allowed students to practice different storytelling techniques and viewpoints with Snapchat Spectacles, a GoPro and a drone. ThreeSixty students learned about the benefits and limitations of each piece of technology before using each while role-playing scenarios.