You really had to look at it to divine that it was a guitar.

The strings were misplaced and its form was decomposed, an imitation of an object rather than the object itself. I’m standing in the Picasso Museum in Paris, France, staring at this painting that resonates with my time in this country. Much in the way Picasso deconstructed life, at times rendering it impossible to perceive, my year in France pulled apart my existence and the way I viewed it.

Before starting my sojourn in Rennes, France, as part of a study abroad program for high school juniors, I was weary of the claim that travel changed you. In retrospect, I see that my immaturity had led me to this false conclusion. 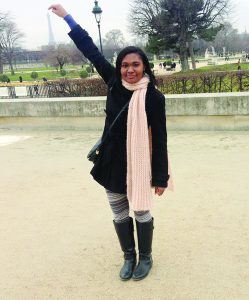 My host mother regularly comments on my transformation, relying on the hack­neyed comparison of the cocoon and the butterfly that lies within. Initially, I shrugged off this remark, but with each passing day I discover the truth it holds.

My first night in Rennes still burns brightly in my memory. I remember lying in my newly adopted bed, feeling as though I would sink into the mattress and never come out. I remember staring out of the window, aware that the night sky I was staring into was not my own. I remember the moment of realization that I’d be here the entire year. It was the thud of reality that remains after the haze of fantasy dissipates.

A feeling of alienation and confu­sion lingered for several months. I struggled to articulate myself in French, helpless to communicate my thoughts and actions. At times I felt my tongue had been severed, and I was at the mercy of whoever was speaking on my behalf.

Apart from language, there also remained the barrier of culture. Despite the fact that both the United States and France are westernized nations, the latter is still at times steeped in customs that I struggled to understand.

I’d listlessly wander around cock­tail parties or linger on the sands near the beach house of my host mother’s friend. Once again, I felt the familiar sting of being an interloper that first struck me after I began prep school last year. In a horrible twist of irony, I ran right back into what I’d been trying to escape, that sinking feeling of isolation.

However, I could not use my old method of simply turning inward. This time, I was forced to endure this constant sense of detachment and upheaval, as though my eyes were fixed upon a burning sun. I stopped eating, never left my room and ruptured any relationships I had formed.

By late December, I was heading home for winter break.

In “The Art of Travel,” a book captur­ing the various phases of traveling abroad, I was particularly fascinated by one passage. Author Alain de Botton writes about how one cold winter night he sees a brochure with lush palm trees, a shining sun and, consequently, a chance at happiness.

My attraction to France could be described along the same lines. I’ve always held a certain fondness for escapism, and when the opportunity to flee across the Atlantic arose last year, I gladly took it.

A bad habit of mine is the tendency to romanticize things. I mentally replaced any bitterness that could’ve met me in France with fantastic images. However, the threat of reality remained firmly planted at the back of my mind. Burdens such as schoolwork, the language barrier and being separated from my family were only passing thoughts in a sea of pipe dreams.

It is only when I went back to Minnesota for winter break that I had a realization. I was finally able to place my expectations and the actualities of my voyage side by side, and I saw that when my hopes did not conform to what I had wanted, I simply shut down. Or rather, I retreated.

If the same thing happened back home, I’d shut myself into a book or some other form of reality that I found more agreeable. In fact, I’d become so wound up in the world of my own creation that the real one ceased to matter. Looking back, I feel a twinge of regret, realizing the experiences I have shut myself out of. Before me lies missed friendships, adventures and time that I will never have back.

After returning to France from winter vacation, I felt a change take place within me. I realized that I did not want to spend the rest of my life running away. Yes, I had found a method of shirking painful experi­ences, but also joyful ones. No longer did I lock myself into the prison of my own making, and I felt a sense of liberation.

This freedom coursed throughout me during my stay in Paris. In the freezing February air, the only source of warmth came from a friend who had her arm locked around mine. We were having a discussion about our purpose being here, for we, as juniors in high school, should’ve been doing anything but leisurely strolling toward the Eiffel Tower.

Finally, she said it didn’t matter whatever motivations or chances had led us here. The only thing of any importance was that we were here, and we had to enjoy it while it lasted. These words infused me with energy that shook off any lethargy that had been instilled within me.

I challenged her to a race under the tower and onto the Champ de Mars, and before she could respond, I ran off. She chased after me, and together we sped into the pitch-black night.