Younger generations have different values than other generations. If they want their values and issues to be given attention, they need to show that they have an active voter base.

ELECTIONS ARE HOW WE hold officials accountable.

When politicians fail to act on their constituents’ interests or lose the public’s confidence, voters have the ability to remove them through the election process.

But in order for that to work, people need to actually vote.

However, few people in the youngest block of eligible voters are doing their civic duty, especially in non-presidential election years. In the November 2014 general election, only 21.5 percent of young people in the U.S. (ages 18-29) voted, according to the Center for Information & Research on Civic Learning and Engagement.

Primaries, especially, can have extremely low turnout. Montana had the highest participation in 2014 with 26.3 percent of voting-capable people casting their vote, according to the Washington Post. Iowa had the lowest with a 9.7 percent turnout rate.

Minnesota’s voter turnout was 10.2 percent, its third-lowest mark in state records, for the primary in August 2014, according to the Star Tribune.

Primaries are where major decisions are set in motion.

“It’s the opportunity for the voters to become involved and participate in who their eventual candidate is going to be,” said Kevin Sauter, a Communication and Journalism professor at the University of St. Thomas whose primary scholarly focus is political communication. 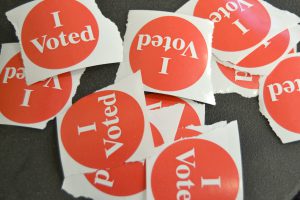 Primary elections have the power to choose which candidate represents the major party. The choice can swing an entire election, and it can even affect the campaign of the opposing candidate.

“Primaries are interesting because, depending on what the party faithful decide, that could determine who’s going to be the candidate and that’s going to determine the ideological leaning of the overall election,” Sauter said.

Low voter turnout among any age group, in both primaries and general elections, could be because people are busy with their own lives and don’t feel like they have time to do proper research on candidates. It can be a hassle to  get voter IDs, and the act of voting does take time.

Debra Petersen, a Communication and Journalism professor at the University of St. Thomas, believes the reason young people might not vote could just be simple voter apathy.

“It’s not that they don’t care, they just don’t feel as much of a stake  in that,” Petersen said. “And then there’s also the question of, who’s out there and is it worth voting?”

The problem with this level of disparity is the potential lack of attention to issues that younger people care deeply about, such as climate change, student loan debt and minimum wage.

We will be living with the changes that current politicians might set  in motion, so we should take the initiative to make sure we like the decisions that are being made.

“It’s better to participate than not,” Sauter said. “I think that’s the hallmark of democracy — we all need to put our two cents in.”

Younger generations have different values than other generations. If they want their values and issues to be given attention, they need to show that they have an active voter base.

They need to show that they care.