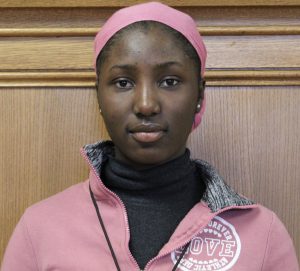 I get STUCK! I don’t know what to do. I don’t believe in myself. I don’t even understand ME! Is she better than me? Yea, definitely? I grew up not knowing my values and comparing myself to others. I WILL NEVER BLEACH MY SKIN!!

I grew up in Sierra Leone with one sister who is two years older.

When I was only 7, I started noticing the people who came around us only did so because of her. She was favored. They would say, “Her skin is so radiant and beautiful.” I wondered why she got all the compliments and not me. The only words used to describe me was Black Diamond by my mother. Women gave her gifts like candy and would celebrate her birthday, but they never did so for me. Very baffled, I became aware of their prejudiced attitudes toward me. They disrupted the bond I had with my sister. I hated them, and I hated myself for feeling miserable.

I WILL NEVER BLEACH MY SKIN!! I told myself. It was as if everyone shadowed the trend of bleaching of their skin with creams and soaps.

We had a friend who lived in the building next to ours. Isabella was light too, and like all of my sister’s friends, she became my friend. Isabella became focused on bleaching creams and oils.

One day my sister went to Isabella’s apartment, they began talking about people who bleached their skin. I didn’t like how Isabella was a negative influence on my sister. My sister returned home with a bottle of Caro White.

There’s a saying, “The older ones set the example and the younger ones follow in their footsteps.” I followed in my sister’s footsteps.

Is this worth it? What do you want? I wondered as I sat on the steps under the sun with my head cupped in my hands as the tears streamed down my face. I felt ashamed.

I appreciated I hadn’t gone too far for me to reverse the process. Every time someone came close to me, I would keep my distance. I didn’t want to talk to anyone, but I was not shy. I learned to accept my friends and accept that others wanted to be around me, and they did not care about the color of my skin, and for the first time I made my own friends.

It seemed weird women in America didn’t bleach their skin, It was surprising that in America the focus was on racism and colorism. Living in Sierra Leone I was never aware of racism, nor colorism.

I was only 11 years old, and I became aware of this implicit bias. I searched for videos to help me learn more about colorism.

In 2014 finding videos on women who looked like me was nearly impossible. In 2016 more women came out and talked about how they learned to appreciate and love their skin.

Now in 2019, I see many women who look like me do great things: Michelle Obama, Lupita Nyong’o, Serena Williams and Beyonce, all teach young girls to love themselves and fight for their greatness.

I loved that society was changing. I was changing; I learned to accept me. I did a presentation for school ninth–grade year on colorism, and my research awakened me to the effects of colorism and racism. One day my schoolmate was giving a presentation on colorism. The motivating sound from her voices in the video hit me. It felt as though the women were speaking to me. The words punctured my heart, and I couldn’t help but cry. I could only let go of my pain by forgiving myself. I am learning to just be me because sometimes the best thing you can do for yourself is to just be. I WILL NEVER BLEACH MY SKIN.